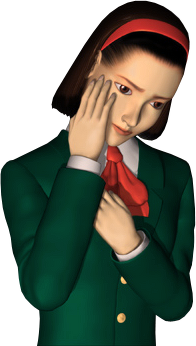 Alyssa Hale (御堂島 優 Midōshima Yū), born as Lynn Maxwell (才堂 凛 Saidō Rin), is the protagonist of Clock Tower II: The Struggle Within. She appears to be a very quiet and gloomy girl. Alyssa is tormented by a violent second alternate personality called Bates who possesses her occasionally.

Alyssa is a teenage girl of Japanese descent, due to the original setting of the game. She has brown eyes and chin-length straight black or dark brown hair. She wears her hair pushed back from her face by an orange headband which sometimes appears to be red in cinematics depending on the lighting.

Alyssa usually wears her school uniform, which consists of a white shirt worn beneath a green blazer, a light greyish-green skirt and an orange necktie. She also wears long white socks. In the Tate House, Alyssa switches to orange indoor slippers instead of wearing her brown outdoor shoes because she has standards. Everywhere else, she wears her outdoor shoes.

Alyssa is very meek and gentle, although she still has some moments of aggression. For example, she smashes her cousin's boombox on the floor just because it's playing creepy sounds.[1] She can also use force when necessary. Unlike some horror game protagonists, Alyssa can fight back with objects, such as whacking enemies with a fire extinguisher, using pots and pans, etc. She even throws objects at her possessed cousin. This may be caused by some of Bates's personality showing from under the surface of her mind, a hint to her having some violent and aggressive tendencies even when not possessed by Bates, or simply mean she's no pushover.

Since her adoptive father, Allen Hale, was never around, she grew up to be very quiet. She can be compared to a shrinking violet archetype. She seems to be lonely and no mention is made of any friends, although it is still possible she has some.

Possessed with spiritual intuition, Alyssa always wants to link things to the supernatural and otherworldly phenomena. Despite this, she also seems to be (understandably) easily shocked by the supernatural events in the game.

Alyssa's personality changes when being possessed by Bates. Bates is cruel, unjust, heartless, cynical, clever, and cunning, yet kind to Alyssa, which might be a simple defense instinct due to possessing the same body as her or due to the possibility he may be her twin brother spiritually living through her. He is the opposite to Alyssa's shy and meek personality.

From San Francisco, born in 1982 as Lynn Maxwell, Lynn was one of twins to the Maxwells. Lynn was never supposed to have been born. Her father, George Maxwell, buried them alive because every few generations believed that the "Cursed Twins" are born.

At the same time, Allen Hale, Lynn's would-be adopted father, wished to bring down George. Out of jealousy of George, Allen dug up the Maxwell grave with his friend, Philip Tate, and they both found her alive while also uncovering a statue. Allen re-named her Alyssa Hale.

To Allen's horror, Alyssa had an alter ego, a male personality came to be known as "Bates." This personality was cold, cruel, and ruthless but kind to Alyssa. When she was a young girl, Allen bought her an amulet at a Mikoshi shrine, which helped Alyssa keep Bates dormant.

Sometime during Alyssa's high school life, she was sent to a mental institute because Bates had murdered some boys who were bullying her while she was walking in the hallways.

Alyssa was sent to a mental institute because Bates had unexpectedly became dominant during a school day and murdered three students and a teacher.

Shortly after arriving at a train station in Osaka but before heading to the Tate House, Alyssa engaged in a conversation with an old man shortly before he left for the next train.

This plot summary follows the canon Ending A.

Alyssa arrives at the house of her adopted uncle and aunt, Philip and Kathryn Tate, to spend a weekend with them. However, she arrives, she discovers several of her cousin's severed body parts around the house, and is chased by her littlest cousin, Stephanie, who is seemingly possessed. She burns the statue given to her by Philip causing Stephanie and her to pass out.

Alyssa later awakens in the Memorial Hospital brought there by Alex Corey who explains how and why she was taken there. She encounters zombies who chase her as well, and meets Doug Bowman while exploring, and Jessica Cook in a storage room. She then is attacked by Henry Kaplan who is shot by Shannon Lewis saying she won't let her die that easily. Heading to the exit with the key fails; Alex arrives and shoots the door but a mob of zombies attack causing her to pass out. Alex kills the mob and brings her to the research facility.

Afterwards, Alyssa finds Shannon who introduces herself to her. She asks Alyssa if she came there to die, but lets her go so that she may "have a bit of fun" with her in the events following. Alyssa then comes across Alex again, who has also seen the killer.

Later, Alyssa finds Maxwell in the lab, claiming she wasn't "supposed to have been born." She flees again, and soon comes across Allen handcuffed to a pipe. After setting him free, the two go to go into Philip's office after encountering Maxwell again. She begs Allen to explain, but he rushes her inside. There, she finds Philip claiming he has finally discovered the secret of the Maxwell Curse.

Downstairs, Alyssa finds Shannon angrily claiming that she ruined her life, and promptly tries to throttle her. Bates emerges and throws Shannon away, who then leaves the room, astonished. Alyssa reaches the graveyard where she finds the dying Philip. He explains to her that the curse never really existed, and warns Alyssa with his last breath.

Later on, Shannon catches up with Alyssa, apparently about to kill Alyssa. Allen enters the room and tells her to kill him instead of Alyssa. Unable to have her revenge, she takes a supposed cyanide pill, suiciding in their presence. As Allen exits the room, he reveals to Alyssa that Shannon was his daughter.

In the next room, Alyssa sees Alex Corey, who states that his investigation is over. He offers to escape with her, but she refuses, claiming she can't just leave things the way they are.

In the shrine, Alyssa finds Allen confronting George Maxwell. Allen explains that he envied Maxwell, and reveals to Alyssa that she is not his biological daughter, but instead the daughter of Maxwell himself, and was buried alive due to being cursed with an alter ego. As Maxwell tries to attack Alyssa, he is shot by Allen and falls to the ground. Allen continues to explain that he loved her, and because of this, infected the statue with the toxin in order to make Maxwell go insane. He then says goodbye and tells her to leave, as the building is about to explode, and collapses. Maxwell rises and attempts to kill Alyssa once more, but she is saved by Alex, who shoots him. The two then escape.

Outside, Alyssa and Alex watch the building engulfed in flames. She laments over her adoptive father's death, claiming she should have died instead. Alex states that it's not like she died there once already, and claims he has to leave in order to take care of the remaining zombies. Alyssa looks up and smiles. During this scene, Bates' voice can be heard whispering, "I'm not going to die!"

Alyssa finds a torso in a bathtub.

Alyssa is freaked out by Ashley's animated arm.

Alyssa shoves Stephanie from her aunt.

Alyssa tries to talk Jessica Cook out of suicide.

Alyssa decides to leave a shotgun during the zombie apocalypse.

Alyssa kills a zombie with a broom.

Alyssa is killed by a random samurai falling from the ceiling.

"This place is scary."

"Look at all of this blood."

Alyssa about to be killed by George Maxwell.

Alyssa in Ending A.
Community content is available under CC-BY-SA unless otherwise noted.
Advertisement