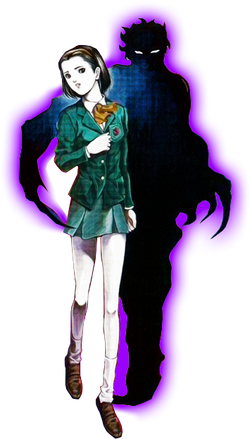 Bates is cruel, cynical and clever, yet kind to Alyssa, which might be a simple defense instinct due to possessing the same body as her or due to the possibility he may be her twin brother spiritually living through her. He does seem to truly care about Alyssa's welfare.

Despite being bold and cunning, Bates is also proud and arrogant; all of these traits together can ultimately lead to his demise, as depicted in some of the endings. Bates is the complete opposite to Alyssa's shy and meek personality, and shows very little consideration to others shall they stand in his way, not treating them with much, if any, respect. He is quite profane, using language like "little shit", "old man/lady", "bitch", etc.

Born in 1982, Alyssa's had a twin of unspecified sex, who was buried alongside her in the Maxwell grave by their father, who believed in his family's curse. The twin suffocated to death.

It is theorized that Bates is the spirit of Alyssa's deceased twin who became trapped in Alyssa's body. However, any actual significance or reason for his existence is unknown. Bates' biography in-game goes as far as to say that he could simply be a ghost seeking revenge on the Maxwell family.

One day, at school, Bates unexpectedly took control of Alyssa and killed three students who were harassing her, as well as a teacher, which led to Alyssa's institutionalization in a mental asylum a year before the events of The Struggle Within.

Throughout the game, he can be dominant if Alyssa isn't wearing the Mikoshi Amulet and encounters a shocking event or danger, and always remains dormant if Alyssa has it in her possession.

Unlike Alyssa, Bates cannot hide or use evasion points, and can only attack stalkers with pistols, shotguns, and machine guns, in addition to the unlockable Milicana.

Bates refuses to access the female bathrooms in the game out of modesty; likewise, Alyssa can only access male bathroom as Bates - a reference to Bates' gender. However, in Time Attack and Score Attack, Bates can access both bathrooms.

This plot summary follows the canon Ending A.

Bates first appears when Alyssa discovers the severed head of her cousin, Ashley Tate, in the house where she was to spend a weekend. Emotionally distraught and without her amulet, she tells Bates not to come out, but he does so anyway, telling her not to be afraid. If the player chooses to talk to Philip Tate in the lounge while Bates is still in control, he will tell him that Alyssa is asleep, and that he is there instead.

When Bates gets back to the dining room, he notices Alyssa's amulet on the ground and picks it up, thus allowing her to come back in control. Soon afterwards, Stephanie Tate makes her appearance and relentlessly chases after Alyssa with a kitchen knife. A while later, Bates and Alyssa discover the golden statue in Stephanie's bedroom, which Bates remarks as "dangerous."

Alyssa reaches the master bedroom, where she finds her aunt about to be attacked by Stephanie. Alyssa pushes Stephanie over and tells Kathryn to escape; Bates then takes over and kicks Stephanie in the face before leaving the room, after telling Kathryn to leave.

Ultimately, Alyssa is begged by her uncle to burn the statue. She goes to the living room, where she throws it into the fireplace as Stephanie emerges from the next room. As she prepares to burn it, Stephanie lunges at her, knocking off the amulet. Bates once again takes over and stabs her, then picks up the amulet again, allowing Alyssa to regain control. She throws the lighter into the fireplace, igniting the statue, and both she and Stephanie collapse.

Alyssa wakes up in Memorial Hospital where she and Bates are forced to evade the zombies as they explore. Bates soon finds Jessica Cook hiding in the storage closet, mumbling about how everyone is going to die. Bates demands to know about the strange creatures in the building, and threatens to kill her if she doesn't answer. She tells him the information on the zombies is in her office, and he goes there to discover that the zombies' weak points are their parasitic brains. With this new knowledge and the help of Detective Alex Corey, he and Alyssa manage to escape to the Memorial Pharmaceuticals Research Lab.

Alyssa wakes up once again, this time in the lab where she and Bates are continued to be stalked by zombies, in addition to a hatchet-wielding George Maxwell. After learning more about her past and the mysterious Maxwell Curse, Alyssa finds Shannon Lewis angrily claiming that she ruined her life, and promptly tries to strangle her. Bates takes over and pushes Shannon against the back wall, who then leaves the room, astonished, after taking a brief look at him.

In the basement, Bates encounters Allen Hale, Alyssa's adoptive father, in an office. Bates reveals that he knows the truth about the Maxwell Curse, but Allen states that even if he does know, "it's all over now," to which Bates disagrees. Allen then tells Bates to go downstairs to see the conclusion.

In the shrine, Alyssa finds Allen confronting George Maxwell. He explains that he envied him, and reveals to Alyssa that she is not his biological daughter, but instead the daughter of George himself, and was buried alive due to being cursed with an alter ego. As George tries to attack Alyssa, he is shot by Allen and falls to the ground. Allen continues to explain that he loved her, and because of this, he infected the statue with the toxin in order to make George go insane, as well as to silence the Tate family. Allen the bids farewell to Alyssa and tells her to leave, as the building is about to explode, and collapses. As Alyssa attempts to reach her father, George rises in a final attempt to kill his biological daughter. However, Alex steps into the room in time and shoots George with his shotgun, killing him for good. The two then escape.

Outside, Alyssa and Alex watch the building in flames. While lamenting over her adoptive father's death, claiming she should have died instead, Bates can be heard whispering that they "did it to themselves," and that he will never die, and will instead live on inside of Alyssa.

Bates in the manga.

Bates in the manga.

Bates possessing Alyssa in the opening.

Bates possessing Alyssa in the opening.

"What the hell?!"
Community content is available under CC-BY-SA unless otherwise noted.
Advertisement