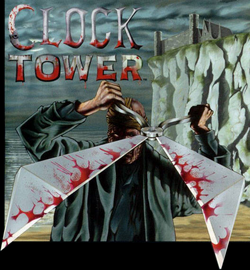 Clock Tower, known as Clock Tower 2 (クロックタワー2) or Clock Tower Second (クロックタワーセカンド) in Japan, is a PlayStation point-and-click survival horror game and a sequel to Clock Tower: The First Fear.

It was released as a PlayStation Classic on the Japanese PlayStation Network for PlayStation 3 on February 22, 2012. This version, however, only contains Japanese text, making it inviable.

Clock Tower tells the story of Scissorman's return following the incident at the Barrows Mansion. The game has five playable characters: Samuel Barton, Jennifer Simpson, Helen Maxwell, Stan Gotts and Nolan Campbell. However, the game primarily focuses on the female characters Jennifer and Helen, while the male characters have less time; Barton is only playable in the brief prologue, while Gotts and Nolan are only playable for a brief time in Chapter Two if the player does not visit the library. The game is divided into Jennifer's and Helen's scenarios.

Note: This summary follows Ending A (it is unknown which ending is canon, however). The game features 10 multiple endings, 5 each for Helen and Jennifer.

The story is set one year after the events of Clock Tower: The First Fear, in December 1996.[1]

After the first game, Jennifer Simpson has been adopted by Helen Maxwell, the assistant of a renowned psychiatrist, Samuel Barton, and is currently undergoing treatment at a university research building in Oslo, Norway, to help her cope with her traumatic experiences in the Clock Tower case and possibly shed some light on the mystery that was the Scissorman.

As Barton hypnotizes Jennifer, Helen takes Jennifer home early, saying that she's not ready to remember the murders yet. Barton then leaves the room and talks to Harris Chapman, an assistant at the university. If Barton talks to him twice, Harris slips his affections for Jennifer and the player will become Jennifer rather than Helen.

Barton goes downstairs and is interviewed by Nolan Campbell, a reporter, and then he gives the Demon Idol statue to either Rick, a former butler for the Barrows family, or Sullivan, the curator of the local library. Remembering where the statue went is crucial in determining the ending.

Jennifer meets Kay Satterwhite, a teacher at Jennifer's past orphanage, and another Edward, an orphaned boy who claims he also survived the Barrows Mansion incident, although Jennifer does not remember him.

Nolan asks Jennifer on a date and Jennifer takes up his offer, but while Jennifer is walking to the date she hears footsteps and runs into the park around the university where she informs the guard that somebody is following her, but then the guard is killed by Scissorman. Jennifer goes into the university and hides. She then finds the dead bodies of another guard and Rose but she escapes using a ladder.

The next day, Jennifer and Helen tell Assistant Inspector Stan Gotts about the Scissorman being back.

Helen is attacked by Scissorman in the library. Helen locates the Demon Idol and escapes.

Nolan visits Rick, a butler of the Barrows Family, but Rick dies by a chandelier. Scissorman chases Nolan in Rick's house. Nolan locates the Demon Idol in a closet on the second floor and escapes.

The group goes to the Barrows Castle in England but are split up. Jennifer is captured by Scissorman (who turns out to be Harris) who was told by the real Scissorman that if he caught Jennifer she would be his, but Harris is killed by the real Scissorman. Jennifer then looks for survivors. She finds Helen in a box and Nolan in a room with ghosts of children that were killed there. Jennifer then finds a door spell and gets it translated by either Helen or Barton. She also finds a dagger, then finds a room under the fountain and hears Kay begging Edward for mercy before she is then killed.

Jennifer then goes into the room with Kay's corpse and the Scissorman (who is really Dan Barrows, Bobby Barrows' brother that Jennifer blew up) who is looking to avenge his brother and mother, but before he can kill Jennifer, Nolan comes in and tells her to run. She puts the statue in a hole and a door is revealed. Jennifer then casts the door spell to open the door. A vortex then opens and Jennifer holds onto the rail but Dan or Scissorman holds onto Jennifer. She then stabs him in the face with the dagger and he falls into the vortex, dying as the door closes then Nolan pulls her up as the the castle falls down, trapping Jennifer and Nolan. After they talk they kiss and start a relationship. They are then rescued by Helen.

Helen's PC hard drive crashes so Helen takes a break. She strolls around the city until it gets dark. Danny replaced Helen's hard drive, and Helen takes a nap on the campus. Helen hears knocking on the door and Scissorman appears, killing Baker. Helen escapes the building using a storage room door.

The next day, Helen tells Assistant Inspector Stan Gotts about the Scissorman being back.

Helen is attacked by Scissorman in the library. Helen locates the Demon Idol and escapes.

Gotts visits Rick, a butler of the Barrows Family, but Rick is mauled by his dog, Victor. Scissorman chases Gotts in Rick's house. Gotts locates the Demon Idol on a coffee table in the lounge on the second floor and escapes.

Later, the group goes to the Barrows Castle in England but are split up.

Upon entering the chapel, Helen encounters Scissorman about to kill an unconscious cross-bounded Jennifer. After Helen shoots him with a pistol to save Jennifer, the wounded Scissorman staggers into the torture chamber.

Helen enters the torture chamber to find and confront a wounded Barton, who had taken off his Scissorman disguise. Having been deeply involved into the Scissorman case, he admits having been drawn into Scissorman's dark soul. Before he succumbs to his wound, Barton asks Helen if she will fall into the same path he faced, to which Helen defiantly rejects.

The player controls a cursor to direct and give commands, such as investigating objects, to a character. The interface is akin to point-and-click adventure games, but simplified to work better with a gamepad. The cursor color symbolizes the character's panic. Scissorman occasionally pursues the player; this delays puzzle solving and requires the player to run in order to find objects or hiding places to fend off or avoid him.

The game is separated into three scenarios, including a prologue, where the main character for the rest of the game is decided. In the prologue, the player controls character Samuel Barton. In the first scenario, the player either plays as character Jennifer Simpson or Helen Maxwell. The playable character for the second scenario can either be Nolan, Stan, or Helen. Between each scenario, there is an intermission, where the player can explore the town and gather clues using a "world map", before moving on to the next level.

The Japanese version of the game contains a secret mode that can be unlocked by playing all 10 endings, called "Buyo Buyo Mode." If the mode is turned on during the game, all of the characters change size and width repeatedly.[2]

The Door of the Fear - Demo Disc

A demo for the game was distributed in Japan around the same time as the game's release. Subtitled, "The Door of the Fear," the demo disc contained a promotional video with scenes from an earlier version of the intro movie, as well as a message from film critic Nagaharu Yodogawa two years before his passing in 1998. Two of the same discs were printed with different SLPM numbers, 80062 & 80063

The demo itself is a 10-minute demo of the last scenario at the Barrows Castle. You play as Jennifer and the events play out similarly to the final version, aside from the scene starting with Jennifer already up instead of confronted by Scissorman. Gotts has no textures, the torture room looks unfinished, and some of the rooms of the Barrows Castle are unclickable, making it impossible to complete the demo. The music is also different from the final version of the game.

Voice files of Jennifer interacting with Helen, Beth, Tim & Barton exist in the demo discs' files, but go unused in the demo itself. Jennifer can only find Gotts and talk to him. All voice clips from the demo were used in the final release of the game in Japan.

This disc also contains a demo for Twilight Syndrome, as well as videos of other games Human Entertainment were promoting in 1996.

The game received positive reviews from various publications at the time of its release. Around this time, it was viewed by many to be one of the scariest games of all time, some calling Scissorman the "Michael Myers Of Video Games". However, as time goes on, the fear level of Clock Tower has been arguably eclipsed by many other titles. Some reviews praised the game for its atmosphere, its interactive story which adds replayability, and tense gameplay.

However, the only complaint that IGN and GameSpot had for the game was its heavy dialogue portions when characters in the game interact with one another and when the character is observing objects. It is also noted that many aspects of the game haven't aged well, such as its early 3D blocky low-polygon graphics, interface and some of its voice acting.

The Japanese front cover of the PlayStation version.

The Japanese back cover of the PlayStation version.

The North American back cover of the PlayStation version.

The European front cover of the PlayStation version.

The European back cover of the PlayStation version.

Decapitated by a clock.

Helen hiding from Scissorman behind a ladder.