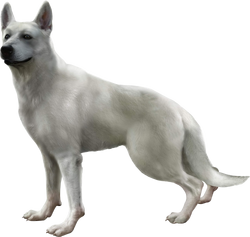 Hewie (ヒューイ Hyūi) is the deuteragonist of Haunting Ground. He is a four-year-old white German Shepherd (Alsatian) who soon joins Fiona Belli on her quest to escape Belli Castle. Hewie becomes attached to Fiona after she saves him from cruel captivity by Riccardo Belli. He seems healthy and was apparently well cared for at some time. Hewie is fiercely loyal and will not hesitate to attack Fiona's pursuers when trained correctly. He is her only hope of escaping the castle alive.

Riccardo was exploiting Hewie for his Azoth; Riccardo, being an imperfect clone, required Azoth in order to prevent his abnormal maturity and slow down his aging. Riccardo had trapped nearby animals from around the castle area and extracted their Azoth. The animals possibly came from nearby villages or the woods. This is also hinted at by cages of various sizes covered in fur and feathers on the castle's grounds.

Hewie was captured by Debilitas from a nearby town/village and was brought to the castle, which explains why Hewie and his collar are found in the castle's basement where Debilitas is seen cutting meat to make some sort of a stew or soup. Riccardo had planned on letting Hewie die first so that he could extract his Azoth later, and left him in a dying state tied to a tree with a thick wire.

After Fiona wakes up from a nightmare, she hears a dog whimpering. She notices Hewie outside a window. Fiona interrupts Riccardo's plans by rescuing and caring for Hewie, who in turn aided her by fighting the stalkers attempting to kill her, protecting her from Debitilas and Daniella.

In Chaos Forest, Riccardo shoots Hewie's leg, causing it to bleed. If the player locates Hewie in the forest, Fiona says "You've been shot. You'll be all right. This will stop the bleeding." and seems to tie a bandage or part of her clothing around Hewie's leg, but it's unknown if she actually does so since Riccardo chases her at that moment. Hewie's comment afterwards suggests that Fiona did stop the bleeding.

Later, Hewie rescues Fiona and assists in their escape from the tower in which Riccardo keeps Fiona imprisoned.

The right analog stick is used to command and communicate with Hewie.

When an enemy is present, the commands are slightly different. Hewie will tend to growl in the direction an enemy will appear to warn Fiona of a stalker.

When the game is finished once, a Secret Room is unlocked containing a mini-game where the player can, instead of controlling Fiona, control Hewie in a number of areas and events from the game. As Hewie, the player must guide Fiona to the exit of the level as quickly as possible. Possible fights are:

Fiona and Hewie.
Add a photo to this gallery

Hewie guarding Fiona from a stalker.

Stuffed Toy.
Add a photo to this gallery

Hewie tied to a tree.

Fiona frees Hewie from the wire.

Daniella attempts to stab Hewie in an optional cutscene.

Hewie escaping the castle.
Add a photo to this gallery

Hewie in the Secret Room.

Fiona the Frog and Hewie.

Hewie wandering off (Hewie should be scolded if this occurs).

Daniella throwing Hewie across the room.

Daniella kicking Hewie across the room.

Hewie being punched by Lorenzo.

Hewie guides Fiona in Dog's Best Friend.
Add a photo to this gallery

Hewie on the memory card screen.
Add a photo to this gallery
Retrieved from "https://clocktower.fandom.com/wiki/Hewie?oldid=30583"
Community content is available under CC-BY-SA unless otherwise noted.