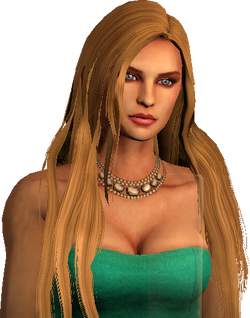 Monica Flores is the first of three playable characters in NightCry, the other two being Leonard Cosgrove and Rooney Simpson. Monica is a student that takes Leonard's course.

Monica has blue eyes and blonde hair that reaches down her back. Monica sports a sleeveless green dress with a shawl which is taken off right in the start of her scenario, and white high heels.

After witnessing Harry's death and the encounter with the Scissorwalker, Monica's dress becomes covered in blood as well as her legs and heels. This appearance remains in Scenario 3.

Monica is out-going and has a lot of friends, but no "best friends." She suffers from mood-swings, and is easily influenced by passing trends. She and Rooney don’t get along, likely because they’re polar opposites. Monica is also shown to be highly determined to survive.

Monica is also shown to be kind to a degree, such as when she helps Vigo boil his artificial eye. However, she acts a bit rude to Rooney for unknown reasons, possibly due to experiences in their past. Monica's relationship with Rooney improves over the course of the game.

Throughout the game, Monica shows examples of being intelligent. Something sensible and intelligent that Monica does is sending an emergency text: "Murder aboard Oceanus. HELP" instead of something like "There's a supernatural murderer who can teleport and uses giant scissors to kill. HELP" as very few would believe that. Monica being non-descriptive probably helped save her and Rooney's life. When Helen Maxwell attempted an emergency call, she got hung up on.[1] Monica may also be interpreted as being more intelligent than Rooney to a degree; at one point, Rooney offers to give Monica a piggy back because her legs feel weak. Monica shuts down the idea, saying if the killer found them, they'd both be killed.

She comes from an impoverished background, the eldest daughter of 7 siblings - some (or perhaps all of them) are brothers. She attends college by working part-time as a janitor and as a waitress. Her dream is to fall in love with a rich celebrity, and she hopes to accomplish that during the cruise.

Later in the game, Monica reveals her little brothers depend on her and she's raising them herself, which could imply Monica and her siblings are orphans. The reasoning behind Monica wanting to get with a rich man is that she wants to become wealthy to help her siblings.

Monica is only playable in Chapter One, which acts as a bit of a tutorial and prologue. She gives a clerk named Eric her jacket.

While looking for her friend Harry, she helps the owner of the ship, Vigo Boradsov, by boiling his artificial eye and also encounters a strange little girl named Connie.

Soon, Monica encounters the Scissorwalker after Scissorwalker kills Harry by pulling him into a vending machine. Monica then tries to escape the ship. Her friends Kelly Butler and Jessica Lopez also go missing.

Monica becomes stranded on the bottom deck, but locates a smartphone belonging to a "John Thompson". John's wife, Angie Brown, communicates with Monica and she is able to unlock his briefcase, finding a fuse that restores power to the elevator. In order to receive the best ending, Monica must find a wedding ring, send a HELP message using the phone, and find Jessica's corpse.

On the upper floor of the ship's cafe, Monica reunites with Eric the clerk and they vow to escape.

In the storage area, Rooney finds a wounded Monica hiding in a storage container, who somehow became trapped in after something locked her in from behind. If Monica received John's wedding ring from Chapter One, she will pass it onto Rooney.

Elsewhere in the storage area, Eric tells Rooney that she can climb through the air ducts to escape. Eric provides Rooney with some antibiotics and in the true ending, both Rooney and Monica take them.

Later, when Rooney is being held by Jerome Theuriau, Monica whacks Jerome on the head with a stick. After Rooney kills Vigo and the Scissorwalker, Monica and Rooney are rescued by a helicopter.

Monica telling Rooney to "get lost" as politely as possible.

Monica hears a girl behind her.

Monica in the "two survivors" ending.

Rooney and Monica.
Community content is available under CC-BY-SA unless otherwise noted.
Advertisement