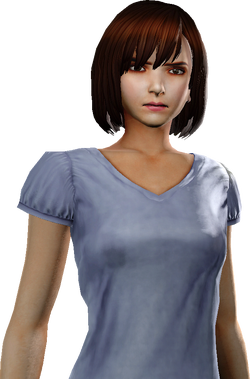 Rooney Simpson is one of three playable characters in NightCry, the other two being Monica Flores and Leonard Cosgrove. Rooney is only playable in the third and final scenario, but the third scenario is the longest in the game. Rooney is one of the students that takes Leonard's course.

Rooney is introverted, quiet (especially in crowds, but less-so in smaller groups), gloomy, serious to a fault, and dislikes standing out. Her grades are relatively high, implying she is intelligent.

It is implied Rooney is lonely and has no friends, except for Monica in one possible ending. Rooney does not get along with Monica, likely because they are polar opposites and because of how Rooney is introverted and shy and Monica is outgoing and extroverted, but this changes during the course of the game.

Rooney suffers from depression, not really finding much joy in anything. She also suicidal tendencies, and has lost the will to live.

Her parents divorced when she was still young. It is implied that Rooney had emotionally abusive parents who would lock her in a closet at night. Neither of her parents accepted her, so she lived with her distant relative Leonard.

She has largely lost the will to live after being possessed by suicidal ideations following a traumatic incident in her past in which she ended up "killing" a little girl named Connie who had tried to shove her in from behind while she was trying to retrieve her hat. It is implied that Connie and Rooney were childhood friends.

Some of Rooney's schoolmates trivialize her mental health and depression to absurd levels and make fun of her, calling her glum, stale and nickname her "Deathwish Diva". Harry says she is "boring as hell". Kelly Butler calls her an "emo nutcase". Rooney gets the sense that she doesn't belong in the group.

Rooney is only playable in the third and final scenario. Scenario Three begins with Rooney mingling at the same party as Monica and follows through to the rest of night. While watching the ocean, Rooney has a suicidal urge to fall in and drown herself (Connie's voice is heard saying that there's "delicious candy" at on the ocean floor moments before). Rooney's suicide attempt is prevented by Jerome Theuriau who empathizes with her and tells her about suicidal ideations. Jerome persuades her to meet her in his room.

There, Rooney and Jerome talk about what's real and existence. Jerome decides to go get some food, but suddenly Scissorwalker emerges from the bathroom and begins stalking Rooney. Rooney successfully hides from Scissorwalker and finds a group of survivors in a room. She also encounters Jerome on a staircase.

In the storage area, Rooney finds a wounded Monica hiding in a storage container, who somehow became trapped in after something locked her in from behind. If Monica received John's wedding ring from Chapter One, she will pass it onto Rooney. Elsewhere in the storage area, Eric tells Rooney that she can climb through the air ducts to escape. Eric provides Rooney with some antibiotics and in the true ending, both Rooney and Monica take them. While climbing through the air ducts, Rooney witnesses Maria Ortiz, who is implied to be one of Rooney's professors at her college, being killed by Scissorwalker.

Rooney later finds Leonard in a tub of liquid in the infirmary room and discovers that his body had been flayed from the neck down. He has been kept alive, but is trapped in agonizing pain, to the extent that he can only beg for death. Rooney ultimately heeds his request by shutting off his life support machine. Connie appears, exclaiming happily that Rooney had killed him. She then asked her how it feels to kill someone. However, when Rooney ignored her and started to leave, she tried to call her out by pointing out how Leonard was like a father to her. This prompted Rooney to stand up to her and reveal what happened on the day Connie died, stunning her. Connie angrily threw a tantrum and accused her of lying. Rooney then told her that she didn't intend for her to forgive her and declared that she will go on with her life. Rooney then left the room, leaving an angry and stunned Connie behind.

Later, Rooney finds Angie Brown hiding in a clothes store and Rooney gives her John's wedding ring. In response, she gives her a billiard ball which is a clue to enter the VIP area. In the VIP area, Rooney enters Vigo Boradsov's room and finds a childhood photo of Jerome, a diary revealing the truth of Scissorwalker, and obtains the Eye of the Kassites.

Rooney enters the dance hall and sees the stringed corpses of the passengers. Vigo applauds Rooney for surviving this far, and a masked Jerome subdues Rooney. Fortunately, Monica bashes Jerome in the head, knocking him unconscious. Rooney tears out her own eye and replaces it with the Eye of the Kassites, allowing her to command the Scissorwalker to take revenge "on the man who turned you into a monster". The Scissorwalker kills Vigo, then disappears, and the two are rescued by helicopter.

Rooney attempts suicide by jumping into the ocean.

Jerome listening to Rooney about her suicidal urges.

Rooney in the game room.

Rooney about to be darted to death.

Rooney hiding in a bathroom stall.

Rooney on a staircase.

Rooney in a flooded hallway.

Rooney ripping her eyeball out.

Rooney inserting the Eye of the Kassites.

Rooney, wearing an eyepatch, and Monica.

Rooney and Monica.
Community content is available under CC-BY-SA unless otherwise noted.
Advertisement