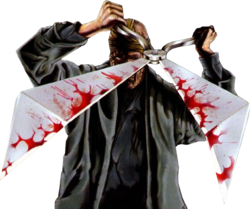 "Scissorman" (シザーマン Shizāman) refers to the identities of many antagonists of the Clock Tower series. There are multiple Scissormen and even Scissorwomen in the series.

They are terrifying, and sometimes invincible and invulnerable, serial killers who pursue the main character.

According to the Japanese novelization of Clock Tower, the Scissorman was regarded as the "Son of the Great Father" in the demonic cult followed by Theodore Barrows, an ancestor of the Barrows Family. They would be born into the family every few generations for the sole purpose of sacrificing children to "The Great Father".

According to the second game of the series, another Scissorman (also known as Little John), prior to Bobby and Dan, lived a long time ago. He had been stopped from murdering people by his father, Quintin Barrows. His corpse can be found in the Barrows Castle in a stone coffin.

In the first game, Scissorman is introduced as Bobby Barrows, the young son of Mary and Simon Barrows. He is the twin brother of Dan Barrows, and they were both known for their murderous tendencies among the locals, however, it was in fact Bobby who was 'the Scissorman'.

Throughout the game, he chases Jennifer Simpson through the Barrows Mansion in an attempt to kill her. He seems to take some childish delight in playing with his victims before he kills them, as he can be seen dancing for a short while if he knocks Jennifer to the floor. It is heavily implied that he is a demon, as it is discovered that his mother Mary was a cultist, and in the opening cutscene of the second game, the baby Bobby's eyes are completely white.

Bobby meets his fate as Jennifer activates the clock tower bells, and the chimes disorient him enough so that he falls off the clock tower to his death (also causing his deformities to kill him).

In the second Clock Tower installment, Scissorman returns, complete with a blue overcoat, a mask and an exaggerated limp. It is revealed that the Scissorman in this game can be a variety of people (Harris Chapman or Samuel Barton), depending upon the choices the player makes within the game.

However, no matter who the fake Scissorman in this game turns out to be, the real Scissorman is always Edward, the only survivor of the original Clock Tower murders apart from Jennifer. It is revealed that Edward is actually Dan Barrows. Edward's role as Scissorman comes to an end as Jennifer and Helen find a spell to open a massive door, which sucks the Scissorman in.

In the port of the original Clock Tower to PSX (renamed The First Fear), an easter egg is added after Dan's apparent death during the explosion: A small ashen-faced boy arises from Dan's ashes, who is the real Dan and later uses the name Edward.

In Rick's House, he can be found resting in a rocking chair and watching cartoons on TV.

Although Scissorman doesn't appear in Clock Tower II: The Struggle Within, he appears as an Easter egg in the Japanese version (Clock Tower: Ghost Head). By selecting the mask icon for the game in the data load/memory card screen, text of Scissorman is seen, disappointed that he isn't in the game.

In addition, there is a theme of cursed twins called the Maxwell Curse, but it doesn't appear to be related to the Scissorman or the Barrows family.

George Maxwell could be considered the unofficial Scissorman of the game, as a masked killer wielding a giant blade to murder the protagonist, although he only appears in one of the game's three scenarios.

Scissorman Ralph in Clock Tower 3 is not related to any of the previous incarnations of Scissorman. He also has a sister, Scissorwoman Jemima. Both resemble circus performers and wield a pair of long knives, which can be put together to create makeshift scissors.

Their true names are Ralph and Jemima (Rudy and Janis in the Japanese version), and were servants to Lord Burroughs, acting as his executioners and torturers. After the death of Burroughs, they were stoned to death by local villagers in retaliation. However, both were resurrected, sharing a single Entity between them.

Scissorwalker is the main antagonist and stalker in NightCry, a spiritual successor and spin-off to the Clock Tower series. Due to the lack of confirmation that NightCry is set in the same canon as Clock Tower, there is no reason to believe she is related to the original Scissorman or the Barrows family. Scissorwalker is heavily inspired by Scissorman in design.

Retrieved from "https://clocktower.fandom.com/wiki/Scissorman?oldid=31348"
Community content is available under CC-BY-SA unless otherwise noted.